His office on the 18th floor of OUE Bayfront building gives him an unblocked view of the stunning skyline that is Marina Bay.

The three towers of Marina Bay Sands lie directly opposite him, next to other icons such as the Singapore Flyer and the ArtScience Museum along the waterfront. 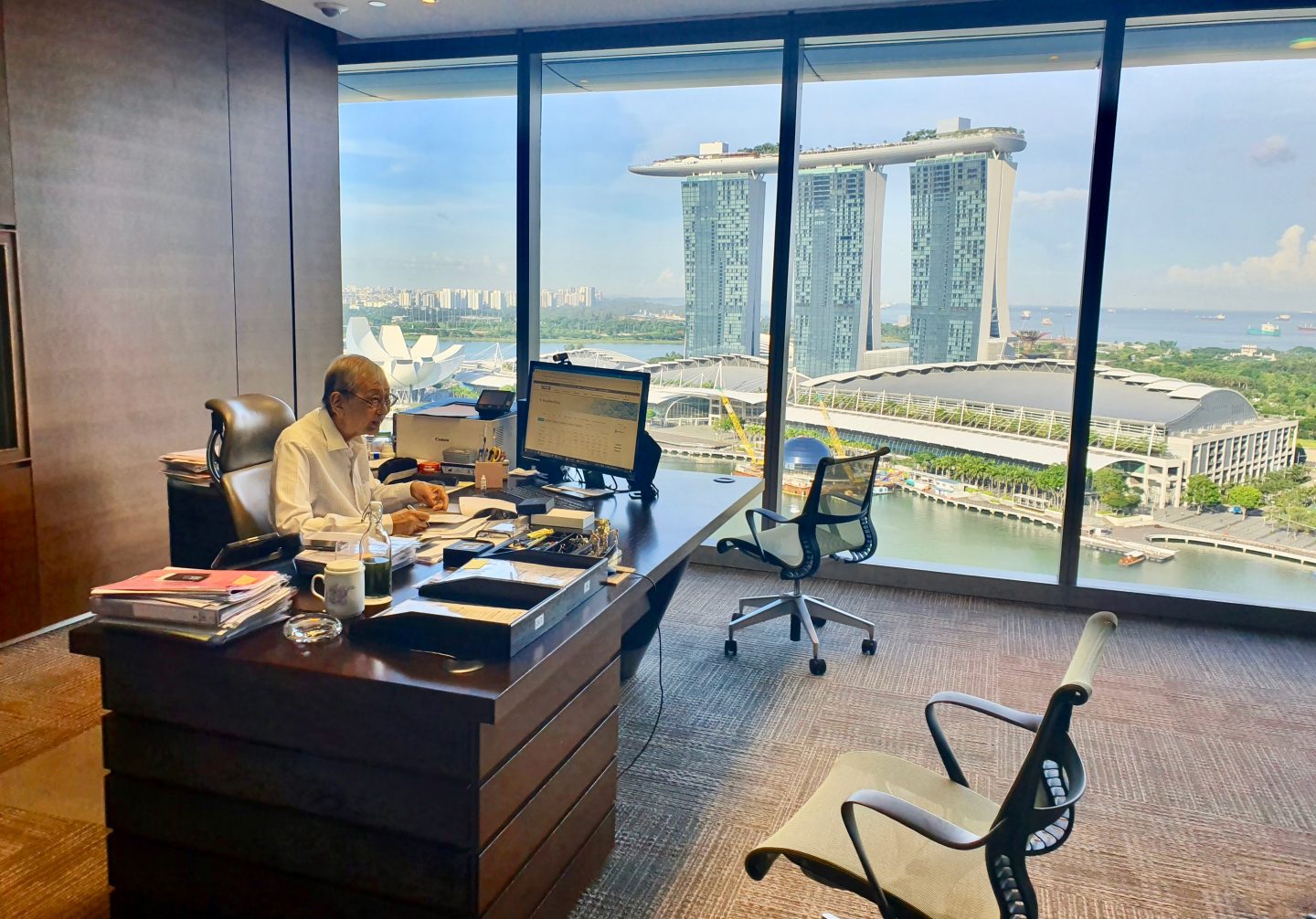 Instead, he cuts a solitary figure as he sits engrossed in his work in the large room.

Some say it is lonely at the top.

So few people would be able to imagine this corporate leader shedding his suits to make his way to developing countries to preach to the masses – as large as  300,000 strong – every year.

Even fewer people would believe that this CEO of a mainboard-listed company, and a passionate evangelist at heart, is 81 years old.

When he speaks at evangelistic rallies in countries such as Pakistan, India and Siberia, thousands and hundreds of thousands of people accept Christ. Miracles written about in the Bible – of the blind seeing and cripples walking – also occur.

“I want to die while preaching the Gospel. I want to drop dead with my mouth speaking of Jesus, so that the next time I open my eyes and see Jesus, He would say, ‘Well done, my good and faithful servant’,” said Mr Thio, an elder at City Mission church.

Death and danger are not foreign or abstract concepts to him but a real possibility.

The Taliban threatened to send suicide bombers to his evangelistic rally in Pakistan some seven years ago and so the police cancelled the event. The next day, three suicide bombers were arrested.

“It’s okay to blow me up, then I would just go home faster,” said Mr Thio, in a calm and assured tone.

Despite his strong faith conviction now, faith did not come early nor easily to him.

Mr Thio was raised in a Christian family and went to church when young. He  later stopped going to church because he did not really believe or understand what the Gospel or salvation meant.

However, he obliged to the request of his wife’s father for them to get married in an Anglican church.

They also attended church services every week, but they would arrive late, fall asleep during the “dull” sermons, and leave early. Reading the Bible was a chore and he would nod off after reading one or two pages.

Yet some 30 years ago, his daughter – National University of Singapore law professor Thio Li-ann – was witnessed to by a group of Christians while she was studying in Oxford. Touched by the Holy Spirit and love of God, she returned to Singapore a changed woman. 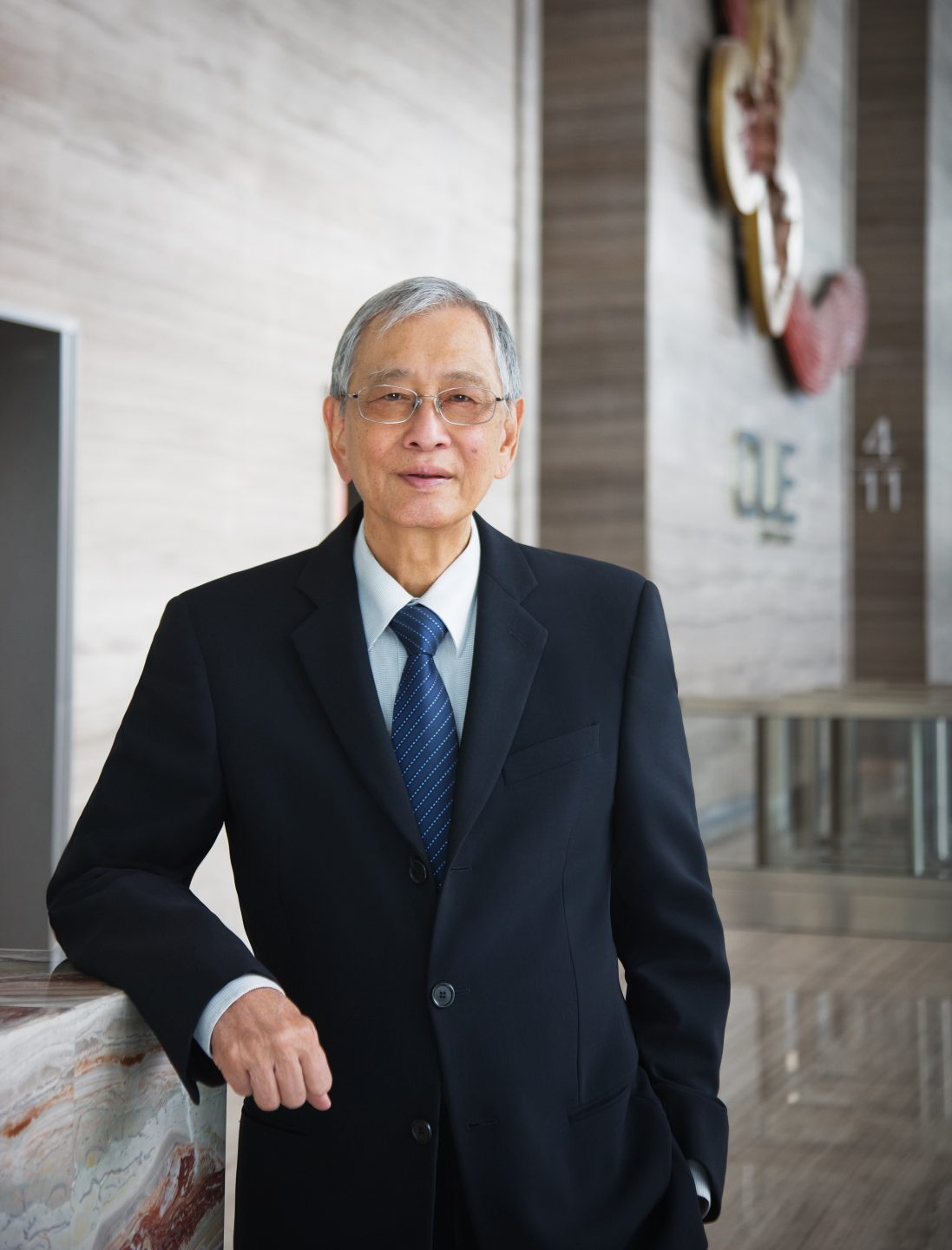 Mr Thio, CEO of a mainboard-listed company and a passionate evangelist at heart, is 81 years old.

“She and her sister began to worry about me and my wife, fearing that we would end up in hell because the way we lived our lives did not reflect our beliefs,” said Mr Thio, who has three children, including former law society president Thio Shen Yi.

Mr Thio then followed his daughter to St John’s-St Margaret’s Church, where the presence of the Holy Spirit was so strong during the worship service that they often found themselves crying, despite their embarrassment.

So one day in 1988 when he was 50 years old, Mr Thio returned from work, decided to lock his bedroom door and go down on his knees.

He said to God: “If what they say about You is real, I want You.”

At that moment, he felt the weight of the Holy Spirit falling on him and he began to weep. During that time, the language of tongues came out of his mouth and he felt tremendous peace in his heart.

“That was the day my life changed completely. God began to put a compassion for the lost and sick into my heart,” said Mr Thio.

After his intimate encounter with God, Mr Thio, then an executive director of Hotel Properties Limited, would hold lunchtime fellowship meetings in his boardroom where he would preach the Gospel and pray for healing for staff members who attended it.

He and his wife also went for mission trips to Indonesia and Philippines, where they spoke at seminars and laid hands on the sick.

In 1993, a friend who knew German evangelist Reinhard Bonnke, known for his large-scale Gospel crusades in Africa, invited him to Mr Bonnke’s rally in India.

“Mr Bonnke laid hands on me and imparted to me an anointing and things started to move from then on,” said Mr Thio.
A year later, Mr Thio did his first crusade in Danapur, India.

“I would preach, whether it is a dozen, hundreds, or thousands – that makes no difference. But God is faithful and He opens doors,” he added.

For instance, God told him once to go to Masaurhi, a city in India, to preach. It was a dangerous and lawless place where murders were common.

In order to hold a crusade there, he also had to get the permission of a gangster chief.

“The gangster chief surprisingly approved it and asked how we were going to be protected. I said we were trying to get the chief of police to be with us and he said the police ‘no good’ and sent his men to surround the rally to protect us instead,” said Mr Thio.

During the first night of the rally, only 3,000 people attended it. But after word got around that a boy who had polio was healed and he got up and ran, about 20,000 people came to hear him speak during the second night.

Bearing in mind Jesus’ command to preach the Gospel to “the ends of the world”, Mr Thio began venturing into countries such as Siberia and Pakistan.

After ministering in Pakistan for the last 13 years, Mr Thio’s rallies there attract up to 300,000 people at a time.

Part of the reason people stream into his rallies is to witness healing and hear testimonies of healing shared onstage thereafter.

There was a 12-year-old girl who had been in a coma for three days because she was infected by a malaria parasite. Her mother brought her to Mr Thio’s rally in India and laid her below the stage. 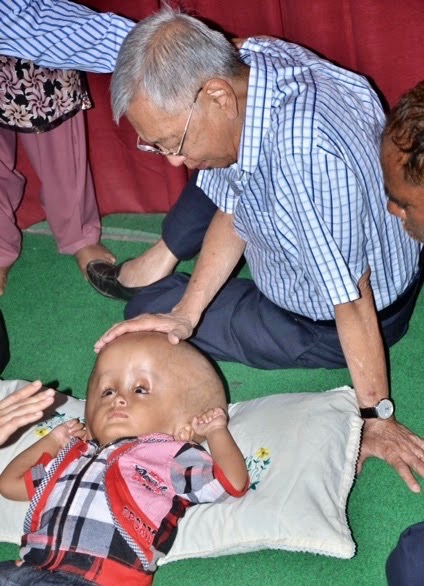 Praying for healing for a child with hydrocephalus. 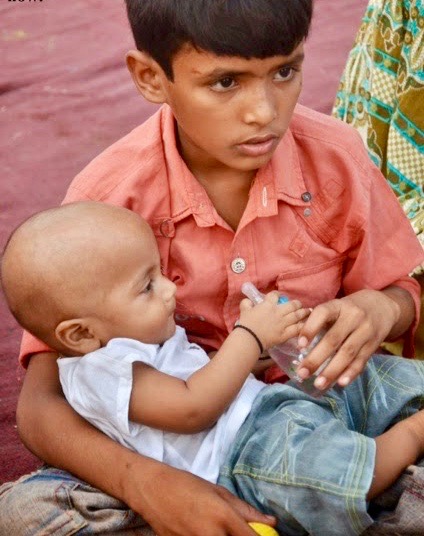 The boy’s head shrank to a normal size after two months.

“I didn’t have the faith to pray specifically for her,” admitted Mr Thio.

So he simply prayed general prayers for healing on stage as people were going up on stage to share their testimonies of being healed. Suddenly, he saw the girl and her mother standing on his right hand side, sobbing furiously.

The girl shared that while he was praying on stage, she heard a voice that said: “I have healed you.” So she got up and people were shocked to see her going up the stage.

Another woman had a cancerous tumour in her stomach and, as he prayed on stage, she felt a bloody mass of tissue being discharged from her body. She put it on a handkerchief and went up on stage to testify.

Sometimes, the healing does not take place immediately but over time.

A boy had hydrocephalus, a condition in which excess cerebrospinal fluid builds up within the brain. He went up to be prayed for by Mr Thio in 2013 but nothing happened. His head remained bigger than his body.

Yet within the next two months, his head began to shrink to normal size.

Sometimes, healing can also take place remotely. Whenever Mr Thio goes to Pakistan, he would also speak on Issac TV, the first  Christian satellite service based in Pakistan.

Once, Mr Thio asked listeners to place their hand wherever they needed healing and he prayed for them.

A woman laid hands on her stomach and later found that her 1kg of tumour there had disappeared. She was so excited that she travelled from her home in Karachi to another city called Lahore, where Issac TV was based, to share her story.

Not everyone is healed, acknowledged Mr Thio. “We do not fully understand healing in its entirety because only God knows,” he said.

Mr Thio also treasures the one-on-one interaction in sharing the Gospel in Singapore. He describes himself as “being on alert all the time” to share the Gospel of hope to whoever who would listen to him.

Once, he came back to office on a Saturday to retrieve a document and saw the accounts lady hard at work. After chiding her for working on the weekend, he felt prompted to go and talk to her again. As the conversation ensued, he shared the Gospel with her and led her to Christ.

Every day, he prays for his staff and also the projects he undertakes.

Over the years, he has seen the faithfulness of God guiding him in his career.

He wanted to retire when he hit 61 years old but was later asked by friends to be the executive director at City Development Limited and Lippo Realty and subsequently chief executive of OUE in 2007.

“Who wants a 69-year-old man to be the CEO? Only God can make things like that happen,” said Mr Thio, who has remained in the position since.

He gave glory to God publicly by putting up a signboard that said: “Fully sold, thanks be to God” outside the Newton One condominium when the project was sold out within two months.

He has no qualms with being successful and making money in the secular marketplace.

“I like to make a lot of money because then I can afford to give it away,” said Mr Thio.

He donates to various charities in Singapore and also foots the bill for evangelistic rallies that are organised overseas. The logistics for  each rally can cost between USD$60,000 to $100,000. 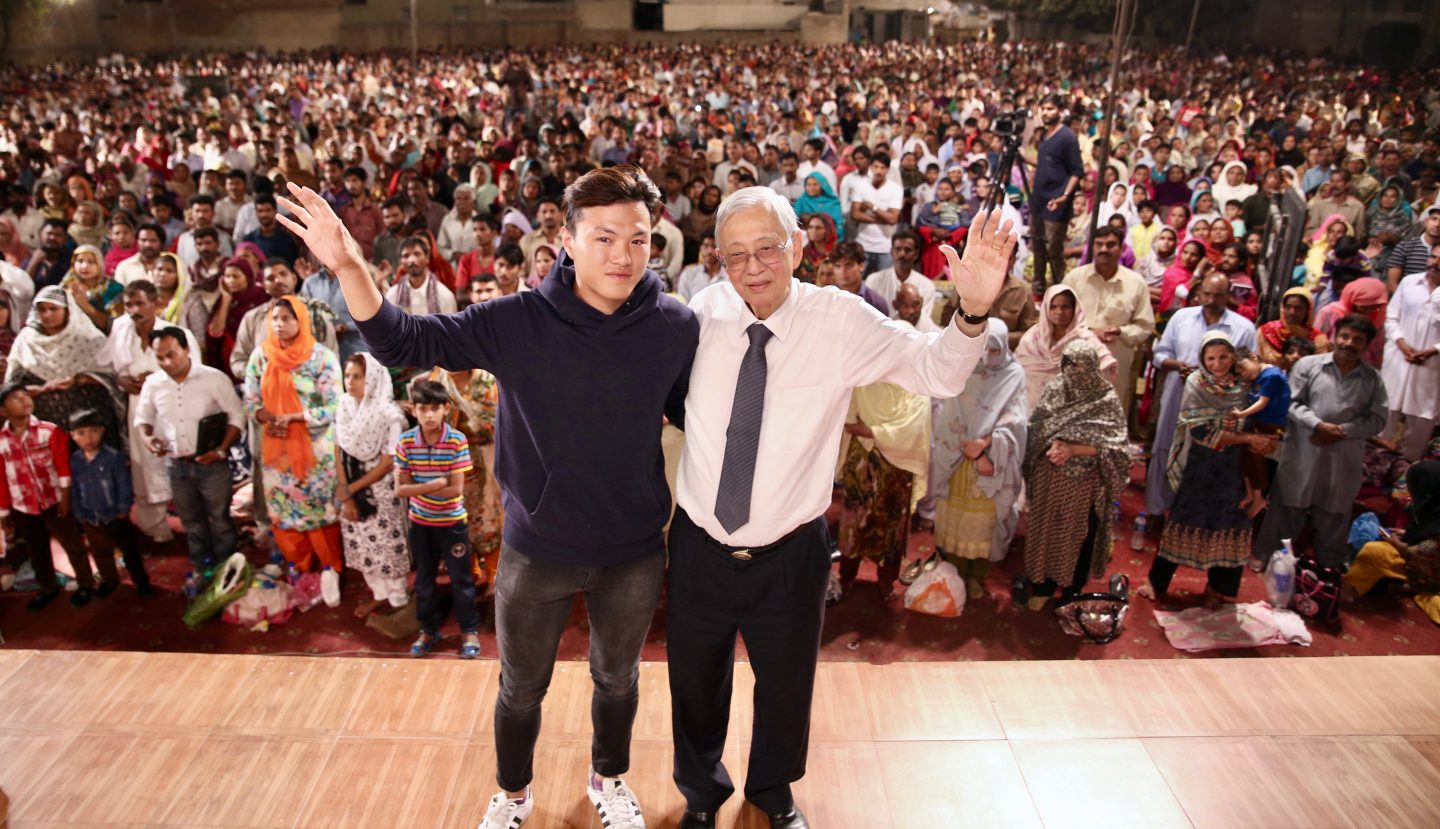 “If we see 300,000 people responding to God, then that is 30 cents per soul. That is considered cheap,” reasoned Mr Thio.
This year, the grandfather of four has already done a rally in Pakistan, and will head to Egypt in September and India in November to speak.

He does get tired when he travels, but the fatigue disappears when he gets onstage.

“By God’s grace, I find that I can preach for hours because I am so excited to see what He can do,” said Mr Thio.

His only regret so far is of not following God earlier.

This year, the grandfather of four has preached at a rally in Pakistan, and will head to Egypt in September and India in November. 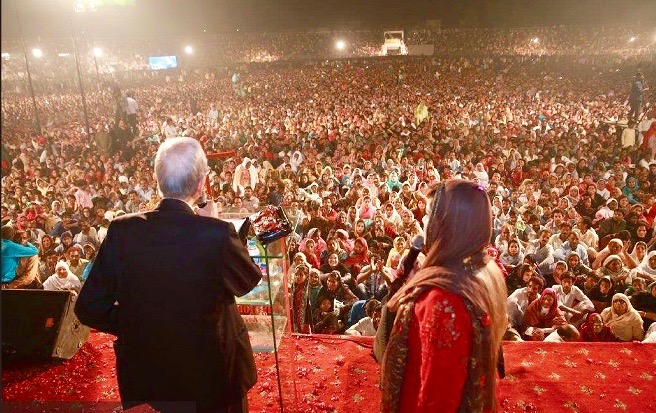 This year, the grandfather of four has preached at a rally in Pakistan, and will head to Egypt in September and India in November.

“But my daughter said wisely that I may not have been ready back then. I was chasing after career, money and all the things of the world, but realised that they mean nothing without God,” said Mr Thio.

So the one piece of advice he has for young people is to “seek their Maker”.

And then he shares the one verse that he lives by because he has known its truth in his life: “But seek ye first the kingdom of God, and his righteousness; and all these things shall be added unto you.” (Matthew 6:33)

Janice is a Social Affairs Correspondent with a local newspaper, passionate in uncovering and rediscovering the voice of the overlooked and marginalised. She drinks from the fountain of living waters and loves soaking in any body of water, or by it, often with a book in hand.